The historic town of Cottonwood is in the heart of Verde Valley wine country. The place sits an hour south of Flagstaff and about ninety minutes north of Phoenix. There’s a business strip downtown with several places to eat and shop as well as four wine tasting rooms. Normally The Classy Alcoholic would be traveling to this lovely town to highlight and review any wine to be found but today he was on a very different mission.

The Classy Alcoholic has been blogging about Arizona microbreweries and wineries for well over a year and he built a considerable amount of fame, fortune and legitimacy throughout the state in that short time. But just as Icarus fell into the sea because he tried to fly after getting super drunk The Classy Alcoholic reached a point where he squandered his fame and legitimacy. He used almost all his celebrity clout to get himself into the VIP areas of the shittiest Phoenix strip clubs for free every weekend because it sounded like a good idea at the time, before he realized just what kind of damage a year’s worth of strip club meals would do to his body. Also most of that fortune had to legally go to his goddamn ex-wives.

Old Town Cottonwood is a peaceful, welcoming place where tourists from all across the state go to spend a relaxing weekend. But any quiet town can have a dark side. The Classy Alcoholic walked into the Fire Mountain Wines tasting room on Main Street wearing his traditional suit, tie and pocket square. He stood at the bar as he waited for his contact to arrive.

The interior of Fire Mountain Wines was adorned with art that highlights the Native and southwestern traditions embraced by the winery. Wine tastings here were $10 for a sample of four and you could choose white, red or a combination of the two. The Classy Alcoholic was perusing the menu when a beautiful blonde woman walked into the tasting room. She wore calf-high boots with a black-and-white dress under a red blazer. She sat at the bar stool next to The Classy Alcoholic and slid a manila envelope to him without looking him in the eye.

“Mr. Classy, I presume,” she said. “I’m your contact. My superiors asked me to deliver this package to you.”

“Thank you. This is exactly what I needed, Miss…?”

The woman shook her head and bit her lip in clear frustration.

“Please don’t tell me you’re such an amateur that you don’t know better than to ask for a real name, sir. I was told to call myself The Classy Lady.”

“A perfect name for a woman as lovely as yourself.”

The Classy Lady was not fazed. She was all business and he was ready to get down to it. He realized that would make a killer line.

“Very well, Ms. Classy Lady. You’re clearly all business and I’m ready to get down to it.” Nailed it. “First things first. Let’s have a drink.”

“I’m not here to drink, sir. I’m here to do a job and I take that very seriously. I’m supposed to brief you on a multimillion-dollar diamond heist that just happened in California yesterday. My agency knows the diamonds are here in Cottonwood and they’re being transported to the buyer some time tonight. We’re short on time and I’m not about to waste it getting hit on by some shady consultant no one’s ever heard of.”

“Well first of all I’m gonna have to take offense to that. My beer and wine blog is actually quite popular online and I’m a regular fixture in Arizona’s wine country, which is why your bosses hired me. I already know about the jewelry heist and I also know that you’re not just here to brief me, you’re also here as my cover. We’re supposed to be posing as a married couple on vacation for our anniversary so if you don’t want to tip off the guy transporting the jewels you’ll chill out for a second and have a drink with me.”

The Classy Lady looked annoyed but knew he was right.

“I only drink white wines.”

“Because they’re so acidic?”

“Very funny. I suppose you only drink reds because they’re strong and bold and you think you identify with them?”

Fire Mountain’s wines were produced with grapes from Arizona, New Mexico and California. There was a tasting menu of four Arizona-only wines. Two white, two red. It was a fitting choice. The bartender poured drinks for the couple.

The Classy Lady took a sip, turned to her new partner and gave him a wide smile.

“The wine is lovely, babe. Thanks for recommending this place. This is the best anniversary yet!”

She grabbed The Classy Alcoholic’s hand on top of the bar and kissed him on the cheek. Holy shit, this lady was good. For a brief second he almost believed she was being sincere. Maybe she was a little better at undercover work than he initially thought.

“Okay, now that I’ve been debriefed and we’re on the same page you should take a look at the young Latino guy sitting across the room over my left shoulder. He’s right next to the bathroom. Do you see him?”

“Yes, he’s got a shaved head, plaid shirt and a neck tattoo. If I had to guess I’d say he’s of the cholo persuasion.”

“His name is Lucius.”

“His neck tattoo says ‘luscious’ though.”

“Yeah, I don’t think he knows his name is spelled wrong. You can’t exactly look down at your own neck.”

“And the letter I is dotted with a crown.”

“It’s a Mexican thing. Doesn’t matter. What else do you see?”

“He’s got a tiny piñata donkey sitting on the table for some reason.”

“Exactly. The diamonds are in that tiny piñata donkey.”

“He’s the transporter? How do you know that?”

“Lucius has been friends with my cousin Chico for years. They came up together doing petty crimes. They started off stealing car stereos, selling counterfeit Russian sex dolls out the back of a trunk, small time shit like that. But Chico said Lucius recently became the upwardly mobile type. He’s been trying to get bigger and better paying jobs from the bosses in his crew. And he’s about to take a big step up-”

“By delivering the diamonds!”

“He doesn’t know there are diamonds in that tiny piñata donkey. He just knows he has to deliver it. So we’re gonna take him down and find out where he’s meeting the guy.”

“Do you have a weapon on you?”

The Classy Alcoholic opened the manila envelope she handed to him at the bar. There was a white handkerchief in it, folded into a small square.

“What? I can do a lot of damage with something little.” He gave The Classy Lady a wink. She smirked but quickly recovered. She looked embarrassed, even. Maybe this smile was more genuine than the last one she gave him.

“Lucius is gonna get a text from the guy telling him where to meet. When that happens you’re gonna go into the bathroom and wait for me.”

“Okay, what do we do in the meantime?”

“I’m thinking we should have another drink.”

The Classy Alcoholic asked for the remaining two tastes in the wine flight. He got his red and the Lady got her white. They walked around the tasting room admiring the art on the wall and holding hands. The Classy Lady laughed as he made jokes and leaned against him once or twice, resting her head on his shoulder.

It felt odd touring a wine tasting room with someone else. The Classy Alcoholic usually roamed the state’s breweries and wineries by himself. It was hard to find a partner who could keep up with his heavy drinking schedule and all of the previous women in his life decided they wanted to make an honest living instead of following him around from bar to bar. He knew The Classy Lady was putting on an act but for a brief moment he decided to just enjoy the charade. Her stunning outfit certainly made her look like she belonged by his side.

The couple heard a beep from a cell phone behind them. Lucius was getting his directions for the diamond transfer. The Classy Lady went into the bathroom and waited as The Classy Alcoholic grabbed the handkerchief from his pocket. Lucius stood up with his tiny piñata donkey and was about to head for the door.

The Classy Alcoholic felt for the glass capsule sewn into the middle of the handkerchief. He cracked it open with his thumb and let the chloroform seep into the cotton.

“Yo, Lucius! What up, dawg?” Lucius stopped dead in his tracks with the tiny piñata donkey in his hand. “Is Cousin Chico with you? That fool owes me a counterfeit Russian sex doll. I sent him the money for that shit weeks ago!” That last part wasn’t even a lie.

“Of course you do, asshole.”

The Classy Alcoholic lunged and shoved the handkerchief into Lucius’ face. He struggled a bit but the chloroform acted fast. He quickly dragged Lucius’ unconscious body and tiny piñata donkey into the bathroom without anyone in the tasting room noticing a thing.

“Holy shit!” The Classy Lady said, panicking. “Did you kill him?”

The Classy Alcoholic broke open the tiny piñata donkey and pulled a black pouch out of it. There were dozens of flawless diamonds inside. He took Lucius’ limp thumb and pressed it onto his iPhone, unlocking it. The last text was from a contact saved only as “J.” It read:

Meet next door at Pillsbury wine company in 15mins.
[Smiling Emoji with tongue sticking out]

“Okay, Classy Lady, we know the location so we have to move fast. How good are you at writing in Old English?” He handed her a Sharpie that he pulled from his pocket.

“Because you need to draw Lucius’ tattoo on my neck. We’re going into that meeting next door and I’m gonna pretend to be him.”

“That’s insane! You’re gonna get yourself killed. We have to call this in. The FBI can interrogate Lucius and get him to give up information on the people behind all this.”

“Trust me, Lucius is a lot of things but he’s definitely not a rat. This one time in high school Cousin Chico had sex with a fat chick named Betty and asked Lucius not to say anything. That was almost fifteen years ago and Lucius never told a single person except me and Chico’s dad. But he didn’t even mean to tell me. I just happened to be in the room when he told his dad. Uncle Frankie was proud as hell. And besides, we don’t have time for an interrogation so start drawing.”

“Okay, but does it have to be Old English?”

“He’s Mexican. OF COURSE it has to be Old English!”

The Classy Lady drew as best as she could while trying to keep her hands from shaking. She was about to get deeper into this mess than she expected. The Classy Alcoholic grabbed her hand and looked her in the eyes.

“Take a breath, my Classy Lady. You can do this. We’re gonna get through this together. By the end of the day you’re gonna make somebody very proud.”

She took his words to heart. She gathered her composure and finished drawing the fake tattoo. She walked out of the restroom and texted her FBI handler to tell him there was an unconscious body that needed to be cleaned up.

The Classy Couple left Fire Mountain Wines and walked to Pillsbury Wine Company right next door. They looked at each other but said nothing. They didn’t need words. They just knew they needed to be ready for whatever came next. 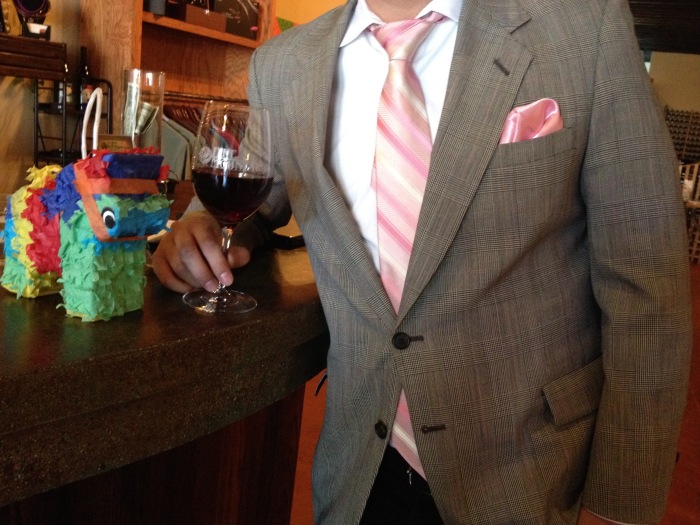