My team and I arrived in Flagstaff via helicopter. Lennix, my FBI contact from my last adventure in Cottonwood, was piloting. Button was in the backseat, getting ready to kick ass and drink beer but then realizing at the last minute that he had run out of beer to drink. We tracked my cell phone’s GPS signal all the way up from Scottsdale. Lennix set the helicopter down in a public park where a family was having a birthday party for one of their kids. The food, party favors and bouncy house all blew away thanks to the wind from the helicopter blades. Man, Lennix was such an asshole.

We headed toward downtown Flagstaff on foot, following the GPS signal toward Historic Route 66. The weather was a bit cooler than it had been back in Scottsdale but it was still pretty punishing for a guy in a suit. The signal ended at Flagstaff Brewing Company. The three of us walked in looking for Fey, $imon’s old-ass henchman.

“The GPS beacon is coming from the bathroom,” Lennix said. “If Fey is around my age he’s gonna be in there for a while. I haven’t been able to take a full dump in under thirty minutes since the 90s.”

“Jesus, Lennix, I swear I don’t even know how you’re still alive.”

“Me either. I should’ve been dead years ago but I really think nothing can kill me.”

I asked for a beer flight while we waited. Flagstaff Brewing has a smaller operation so they only had four of their own beers on tap this day with several other guest taps. But what they lacked in beer production they made up for in their enormous whisky wall. Apart from their beer this brewery prides itself on their extensive Scotch and Bourbon selection and they even offer whisky flights.

I got my four beers and Button asked for a flight of Highland Park Scotch. He got sips of the 12, 15 and 18-year batches. Lennix got a glass of Bourbon that he mixed with a bit of the Metamucil that he always carried in his back pocket.

I sipped a glass of the 3-Pin Pale Ale. It was light on the hops and kinda dry on the finish. The GPS tracker started beeping faster and faster. We looked to the back of the brewery and saw old man Fey walking over to the bar with his jean shorts and fanny pack. I tried to turn away so he wouldn’t notice me but I was the only dipshit in the brewery wearing a suit, tie and pocket square.

“Oh fuck, it’s The Classy Alcoholic!” Fey yelled as he ran toward the front door. Lennix ran after him and grabbed the back of his fanny pack strap. He pulled Fey back toward him and they both fell on their old asses. I heard a couple of cracks and figured they each broke a thing or two. Button punched Fey in the stomach and held him down to keep him from escaping. I kept drinking my beer ‘cause it looked like these dudes had their shit handled.

“Alright, old man,” Button said, full of Scotch rage. “You’re gonna tell us where $imon took all those kegs he stole or I’m gonna take your little fanny pack and wrap it around your face like a snorkel. Then I’m gonna sit on that fanny pack and make you snorkel through an ocean of Button Hole until you agree to talk!”

“Hahahaha! You think you can threaten me kid? I endured years of torture from the Viet Cong back in the 60s. I highly doubt you could get me talk when they couldn’t. Plus, you’re describing the exact same thing I paid extra for during my last sex tour in Amsterdam five years ago!”

Lennix and I looked at each other, realizing that Fey wouldn’t respond to physical threats and also fondly remembering those same Amsterdam sex tours we each went on a while back. I took a sip of Flagbrew’s Agassiz Amber, a beer with a strong caramel flavor with some nice hop taste tossed in, as I came up with a plan. I thought back to my first interaction with Fey at Goldwater Brewing Co. in Scottsdale and how angry he got when I asked him if he worked for $imon. I brought Lennix over and whispered in his ear while staying far enough away to avoid the hairs growing out of it.

“I respect you, Fey,” Lennix said. “I know you’re a man of honor. I’m sure you’re willing to go to prison before rolling over on your boss, $imon. You’re the best underling a guy like him could hope for: loyal, quiet and obedient. I salute you.”

Fey looked like he was pretty much foaming at the mouth. He didn’t like that implication at all.

“FUCK YOU, LENNIX!!! I’m not Simon’s goddamn henchman! I funded that kid’s entire fucking plan! I paid for those explosives. I gathered his army of hired goons. I supported his homebrewing hobby for years even though his beer tasted like watery dogshit. And I’m the one who paid for his life-saving surgery after that dumb little asshole got his face blown off by a homebrew keg because he didn’t know when it was over-pressurized. But it didn’t matter that I spent millions of dollars from my personal fortune to try and make him happy. That ungrateful little turd still treats me like I’m someone he can boss around.”

“Holy shit, Classy,” Button said. “I think I know who this guy is. There was a dude named Simon who joined the Arizona Society of Homebrewers a few years ago around the same time I did. He was an obnoxious douche who drunkenly hit on my wife all the time and he kept whipping out his dick at every Homebrewer’s Society meeting. We couldn’t do anything about it because he always got in early enough to add his dick to the meeting agenda. Plus his beer was absolute garbage. We all heard about a keg blowing up in his garage and we seriously thought he was killed. I’m not gonna lie…the entire Society of Homebrewers was kinda relieved when it happened.”

“He wasn’t killed, Button. The explosion blew Simon’s jaw right off his face. It couldn’t be recovered so I had the surgeons replace it with a state-of-the-art robot jaw. He spent the next few years in rehab learning how to speak again and following this Classy asshole’s rise through the craft beer industry.”

I drank the next beer in the flight, the Bitterroot ESB. The ESB stood for “extra special bitter” and it was based on an English Pale Ale style that had a strong balance of strong malt and hop flavors. $imon’s whole plot was starting to make sense…but there was one more thing I didn’t understand.

“Tell me something, Fey. If you’re not working for $imon then why are you funding his whole operation?”

“Goddammit, stop calling him that! I didn’t name him with that stupid dollar sign. His real name is Simon Billingsley Fey III. He’s my son. And he’s a total disappointment! But I couldn’t just let him try to make it out there on his own. His mother raised him to be a total pussy before she died mysteriously in a car crash with her lover in the passenger seat so she couldn’t take half my shit after the divorce. So it was up to me to support Simon’s stupid goals. I spent thousands of dollars on his homebrew materials even though his beer tasted like hot garbage water. He wanted to start his own microbrewery but I knew he couldn’t compete with any breweries in Arizona that knew what they were doing so then I bought a huge stake in Anheuser-Busch so we could start trying to buy out or shut down breweries all throughout the state. Just so Simon could get his stupid little fucking business off the ground.”

“Dude, you spent that much money on your shitty kid? How much are you actually worth?”

“A couple billion. No big deal.”

“So what the hell is he doing with all those kegs he stole from Tucson and Phoenix?” Button asked. “Does he just want to hoard them for himself?”

“No, Simon can’t drink beer anymore. His robot jaw will short out if he does. He’s gonna put a bomb on every single one of those kegs and blow them up on live television.”

“Every keg?” I asked. “There must be hundreds of them if he knocked off every brewery in Tucson and Phoenix.”

“That’s right. And I bought him every single one of those explosives. I had to liquidate a couple of strip clubs and a few brothels and a bunch of day care centers I owned in order to make it happen. I also paid for him to rent out every single Grand Canyon helicopter tour in the state. Simon’s gonna load the kegs into the back of the helicopters and blow them up at the same time over the canyon while every local news channel records the destruction of Arizona’s craft beer industry.”

Holy shit. $imon wasn’t just going to blow up most of Arizona’s craft beer, he was also going to kill every Grand Canyon helicopter pilot along the way. I drank the last beer in the flight – the smooth, creamy Blackbird Porter – while I figured out what to do next.

“Alright, Fey, it looks like we have a bargaining chip to get $imon’s attention.”

“Heh. You mean me? That dipshit kid doesn’t care if I live or die.”

“No, I’m not talking about you, asshole.”

I reached into Fey’s fanny pack and grabbed my cell phone, a cigarette lighter and his checkbook. I asked Button to take a picture of me holding the lit lighter right next to Fey’s checks. I got $imon’s number from his dad and texted him the picture with a special message:

I immediately got a text back from $imon that said, “Who dis?” I texted back and said it was The Classy Alcoholic and then he texted back again saying, “A’ight.”

Lennix called a squad of his fellow FBI agents who came into Flagbrew and hauled Fey off. I gathered my team and gave them the plan. Lennix was going to take his helicopter to the South Rim of the Grand Canyon while Button and I headed to the town of Williams, the home of Grand Canyon Brewing Company. It was just under forty minutes west of Flagstaff on I-40. For the first time today we weren’t going to be chasing after $imon. We finally had the upper hand and he was going to meet us on our turf.

Button finished his whisky flight. I could see his hand shaking as he took his last sip of Scotch.

“Are you nervous Button?”

“Of course I am, Mr. Classy. Don’t get me wrong, I’m ready to kick ass and give a fuck but then realize at the last minute that I’m all out of fucks to give. But I remember this $imon character from back in my homebrew days. He was a total egomaniac who thought his shit didn’t stink.”

“And you think I can’t handle this guy?”

“Well, no, I definitely think you can take him out. But…ummm…$imon was the kind of oblivious egomaniac that never had any self-doubt. As far as I can tell you’re the kind of guy who knows himself well enough to constantly doubt himself. And I guess I’m worried that you may be even more nervous than I am.” 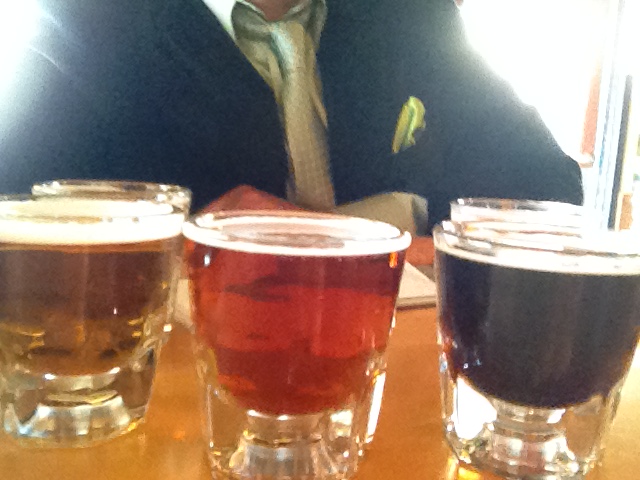