Note that as of April 2016 the Black Hole Beer Company taproom has closed. The place is now a bar and grill operated by different owners. This review of their taproom is now considered a historical document.

I mentioned last week that I didn’t want this blog to appear Phoenix-centric because I know the place can overshadow other, cool parts of Arizona. As a way to show my commitment to highlighting the off-beaten paths of my state I’m writing about a startup brewery in the town of Prescott named Black Hole. This place only opened in April of 2014 and already shows great signs of longevity. More about that in a bit. First, I should mention that Prescott is a beautiful town which, curiously enough, is pretty much equidistant from Flagstaff and Phoenix. Those of you who’ve never been are advised to pay it a visit. 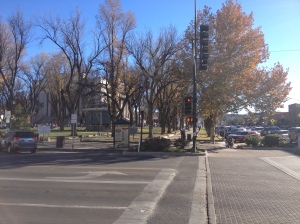 One big problem I’ve had with some residents of Phoenix is that they consider the city to be “modern” because they have the luxury of an Applebee’s  every couple of miles and mapping a location of every Walmart in the area produces enough red dots to make it look like the city has corporate herpes. Let me make this clear to you right now: A Classy Alcoholic never drinks at Applebee’s. That place is the antithesis of everything you stand for. Going into an Applebee’s indicates to the world that you’ve given up on life. The suicide rate among Applebee’s regulars would be high if it were tracked but it’s not because no one ever notices those people are gone. If Applebee’s were a school every single one of its graduates would end up either in prison or working at an Applebee’s. When Clyde Bruckman saw a vision of someone dying alone in a room full of a dozen cats he called it “An Applebee.”  If you’ve never been to such a place I can only describe it by saying that Applebee’s is the Chili’s of TGI Fridays. Applebee’s is where pregnant, teenage runaways go to find people who made worse decisions than they did…because they’re at a fucking Applebee’s.

Anyway, entering Prescott from the east via Highway 69 didn’t exactly inspire confidence in its reputation as a historical landmark. There was a couple miles’ worth of strip malls boasting a Walmart, a giant Starbucks, an Olive Garden and any other number of corporate open sores to leave a bitter taste in your mouth while heading into town. But that dissipated as I approached downtown Prescott. The entire area was a hub of restaurants, bars and shops that felt cozy and genuinely modern without shitting all over the town’s vintage look. For those of you who don’t know, Prescott has a significant place in U.S. Western history as it is the town where Wyatt Earp caught the syph from a plus-sized bar wench named Gertrude and where Doc Holliday once punched a lady in the face for having an opinion about stuff.

Black Hole Beer Company is less than 10 minutes away from downtown and I must admit that approaching the place at first made me feel like I shouldn’t go inside unless I wanted to spend an inordinate amount of time putting lotion in a basket.

If it weren’t for the sign up top it could easily double as the haunted house my uncle used to run when I was a kid. I would work there during the summer helping him bag up the fake, blood-soaked body parts then we would bury them in the most remote parts of the desert together. I always thought it was weird that he operated a haunted house year-round and that there were always so many new fake body parts every single week but Tio Chainsaw – as the cops called him – just told me not to ask any more questions unless I wanted to end up buried inside one of those bags myself. I remember he would always take me out to get an horchata after the long hike back from the Sonoran Desert once we were done burying bags and torching whatever new car we used to drive out there. Such good memories. I miss my Tio Chainsaw. I haven’t seen him since he retired and moved to Venezuela or Ecuador or one of those countries he said wouldn’t “extradite” him, whatever that means.

So I conquered my fears and went inside the Black Hole Beer Company. I can tell you that the place was not as scary as I first thought. In fact, it was an absolutely charming place that hosted live music and had a variety of drinks. At the time I stopped in, Black Hole was only serving two beers they brewed themselves. The Comet IPA and the Space Ghost, the latter being a light, wheaty beer. What they lack in their own number of brews, though, they make up in a variety of other drinks. They had about ten other microbrews on tap as well as whiskey, scotch, vodka, gin, wine and a small cocktail menu.

The place refers to itself as a “Gastropub.” Now, if you’ll remember from last week’s entry the term “Brewpub” just refers to a brewery that also serves food. Well Gastropub is a term that originated in London in the 90s to refer to  a pub that serves higher quality food and beer, instead of just the usual snacky food items that pubs normally served prior to that. It’s mostly a bullshit status term that has nothing to do with whether a place brews their beer or not but it’s good to know that whenever you hear the terms Brewpub or Gastropub you can confidently expect food along with your libations. Knowing these terms is only important so that you can impress someone who asks you what the hell they mean.

The inside of Black Hole felt like the little-known, underground, divey place you can run to when the other bars are overcrowded by people watching the big sports event of the moment. I know for a fact that there was a sport of great significance sporting the same day I went to Black Hole and that other drinking establishments in town were excessively sportified by people who enjoyed the day’s sportitude. But Black Hole had no TV screens showing the sportery and I actually forgot that a sport was even supposed to be sportruding that day. I can hear some of you readers thinking, “Fuck yeaaaaah” at the thought of a quality drinking establishment that doesn’t cater to the sportarded crowd. I actually understand the desire for other breweries to have TVs showing sports for their potential customers but I can definitely respect a place like Black Hole that chooses not to make that their style.

The coolest part of Black Hole was their merch table, though. Like most breweries they have the standard t-shirts and hats but this place also sells home brewing kits! They also sell something that’s ubiquitous in microbreweries and that we haven’t talked about before but is an essential purchase for a Classy Alcoholic. I’m talking about growlers, which are the jugs you can see in the far left and far right of the picture.

Growlers are jugs you can own and get refilled with the beer of your choice at any microbrewery. I say they’re an essential purchase for Classy Alcoholics because once they’re open the beer won’t last for longer than a day. So you have a perfect excuse to drink the whole damn thing in one sitting. Plus you can buy literally dozens of them as “mementos” from all the breweries you visit and have them stocked in your fridge where food is supposed to go because who needs food? It takes away from valuable drinking time. Not to mention that making daily visits to breweries can be explained away to concerned friends and family as you just getting your growler re-filled because you like fresh beer. When they give you a confused look because they don’t know what a growler is you can just explain it to them condescendingly and then give them that you-wouldn’t-understand-because-you-don’t-drink-anything-other-than-Bud-Light-you -fucking-peasant eye roll.

As I mentioned in the Intro post, the trick to classing up your drinking and hiding your alcoholism from your loved ones is to make drinking seem more like a hobby than a dependency and having tons of growlers from every brewery you go to is something a “collector” would do. Not much different than someone tracking down rare Baseball cards or vintage Star Wars action figures.

Growlers are most often sold in a 64 ounce size. You pay a one-time fee to own the growler for life and then pay again each time you come back to refill it with beer. Black Hole’s growlers go a little above the norm by selling them in 2 liter size. They also have smaller, 32 ounce growlers that you can see in the far right of the merch table picture but, really, there’s no reason to buy that. A 32 ounce growler should honestly come standard with a nipple because that’s some baby size shit.

But the bottom line is that Black Hole Beer Company is an awesome place to hang out. Do not judge it by the muder-rapey look of the outside like I did at first. You’d be missing out on a fun, relaxed place to unwind and meet some cool people, like the lovely, plus-sized lady named Gerty whom I met there and who told me that her family comes from a long line of Prescott bar wenches dating back to the 1800s. And the fact that Black Hole only has two of their own beers on tap just means that they should be supported so they can brew more in the future. If the quality of their current beers is indicative of what’s to come in the future then I’ll definitely be paying them another visit soon.

…but maybe I’ll go during the day, though.