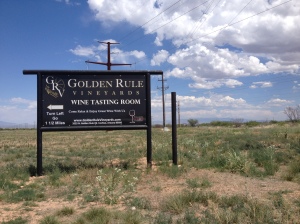 I’ve mentioned before that Arizona has three main Wine Trails where grapes are grown: Verde Valley, Sonoita and Willcox. Today is our first visit to the latter but we’re not exactly heading to the town of Willcox. Instead we’re in a small town called Cochise which is an hour East of Tucson and Sonoita and is less than half-an-hour West of Historic Downtown Willcox.

Cochise was created in the 1880s as a stop for the Southern Pacific Railroad and, since robbing trains was all the rage back then, the town was the location of The Great Cochise Train Robbery of 1899. A couple of deputy sheriffs from Willcox realized that, even back then, careers in law enforcement paid like shit and they decided to moonlight as train robbers. Kind of like an Old West version of Denzel Washington in Training Day or like Batman in reverse. That’s another thing I love about Arizona. Just about every small town has a history of outlawry and varmintry.

Today we’re heading to the tasting room for Golden Rule Vineyards, a place that started planting grapes in 2009 and only just started pouring in November of 2014. Because the road through Cochise was so desolate and Southwestern-y I decided to pull out the cowboy outfit I first wore during my trip to Tucson a few weeks ago as well as my trusty horse, Poontang Pie.

I rode Poontang Pie east on I-10 and exited on Dragoon Rd some 20 miles or so before getting to Willcox. Not too long after exiting the highway I trotted up to a two-story building where the owners, a married couple name Jim and Ruth, welcomed me at the door. I tied Poontang Pie’s reigns to one of the pillars and walked in, spurs a-jingling.

Golden Rule had ten wines available. One White, one Rose, the rest of them Red. Tastings were $9 if you wanted to keep the souvenir glass with the vineyard logo on it and $7 if you didn’t. You can one ounce pours of five wines of your choice or you can get half-ounce pours and try all ten. I, of course, opted for the full ten. The owners were kind enough to warn me that all ten wines might confuse and disrupt my palate. I helpfully informed them that nothing could be more disruptive to my palate than the many late nights I spent in my early twenties shoving curly fries into fast food tacos then washing the horrifying concoction down with swigs from a bottle of cheap Mexican brandy. My palate is basically a grizzled, Iraq War veteran left for dead on the battlefield who crawled his way across the desert with tourniquets on the stumps where his legs used to be and a few bags of Jack In The Box tacos were the IEDs.

Anyway, the white wine that Golden Rule had was a Malvasia Bianca and it was the only wine here made with grapes that were purchased instead of grown in the vineyard. I’m not a very big fan of whites but this was probably one of the best ones I’ve ever tasted. It was very light and not overly dry or bitter like other whites I’ve had. The Rose was also very light and smooth and both of these wines make for great summer drinking.

The Sangiovese and the Lucky Prospector were on the lighter side of the reds that were offered here and they’re both perfect for social drinking. The kind of wines you can pour at a party and go down so easy and smooth that, before you know it, you’ll have killed off a whole bottle or two and find yourself drunkenly hitting on your wife’s cousin. Again. And you’ll try to blame the wine. Again. And you’ll find yourself finally having to pack your shit and leave the house with nothing but a suitcase and a loyal horse to keep you company.

Anyway, the Manzora Red and the Eureka are heavier and work less well for casual sipping but they both have great, bold tastes that pair very well with grilled meats. They’re each blends of three different grapes. I’ll confess that I used to have a negative opinion of blended wines. In my mind they were made of all the shitty leftovers that got tossed together to avoid wasting anything (which can definitely be the case with cheap blends) but a good blend takes the best flavors of the best grapes and makes an amazing wine Voltron of complex flavors. Both of these are award-winning wines and for good reason.

Golden Rule’s Cabernet Sauvignon was named the best Cab in the state last year at some farm competition and it was definitely a great-tasting wine. But my personal favorite was one called Commonwealth that was a blend of Syrah and Petite Sirah. It had a blod kick at the beginning and finished off with a fruity taste that was strong but not overwhelming. I decided to take a bottle of the Commonwealth home along with a bag of pistachios grown by the same owners of Golden Rule at a farm called Cochise Groves.

Despite being a new operation Golden Rule already has a great lineup of wines and they have a bright future ahead of them. Be sure to not miss Golden Rule Vineyards if you’re hitting the Willcox Wine Trail. I straddled Poontang Pie with my bottle of the Commonwealth and my new souvenir wine glass and hit the road to my next adventure. I would definitely come back to Golden Rule Vineyards soon.  But for now I had to find a place to crash for a little while. See, I recently had a few too many glasses of light, easy drinking wines at a party and ended up drunkenly hitting on my wife’s cousin. Again. If anyone has a place I can stay for a bit, email me and let me know. I’ll have some cash to kick in for rent once I return Poontang Pie to the place I rented him from and get my security deposit back.