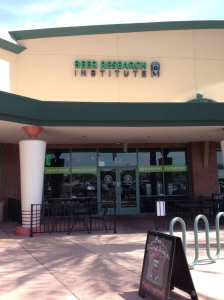 The Beer Research Institute in Mesa is located on the grounds of the Mesa Grand Shopping Mall right next to the AMC movie theater, which is an awesome location for a microbrewery because I honestly haven’t been to a movie theater sober since I was a teenager and don’t understand how anyone else could do it either. Most movies are shit and the best way to make them at all interesting or hilarious is to be appropriately hammered. Like the time I drunkenly puked into my neighbor’s popcorn bucket while watching Paul Blart or The Avengers or Schindler’s List or whatever that movie  was.

Anyway, the only other Research Institute I’ve been to in my life was the Detroit Center for Robocop Studies. I signed a contract donating all of my limbs and organs for them to use whenever they finally get their Robotic Law Enforcement Project into final development. They’ve had a couple of trial runs but the prototypes keep accidentally shooting the institute directors to death and they’re having some trouble getting anyone to take the job now. So I was excited to visit an institute that researches the only thing I enjoy more than marginally-human murder bots. 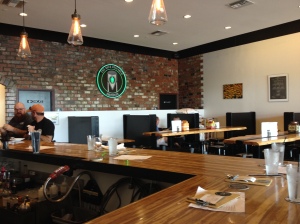 BRI, which is what we cool kids call it, has about 15 beers on tap and they currently brew 8 of them themselves. But on the day I went they only had 6 of their own beers on tap so we’ll only be talking about those today. They also offer wine and cocktails if you’re not a beer person and they make food if you’re looking for dinner before or after your shitty movie. Their food menu has some pretty standard brewpub fare like tacos, wings, sliders, salads, burgers and sandwiches. But a few of their offerings are a bit out of the ordinary like a poutine appetizer, a Cubano sandwich, an enchilada plate and green chili mac & cheese to which you can add machaca or carnitas. 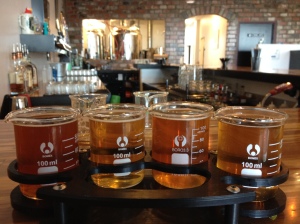 I decided to focus my research on beer instead and got my flight that was poured into these adorable little beakers which fit in with the science theme of the brewery. The first beer was called Intergalactic and it was a saison. Normally saisons are too light in flavor for me but this one had a nice, ever-so-slight spice to it from the added hops. It was a really good light brew for the craft beer newbie who comes in to this place looking for a Michelob Ultra or whatever-the-shit before they go see their terrible movie starring a talking dog or an actress over 30 or something just as implausible as that.

The next beer was called Street Cred and it was a Black IPA. It tasted high on the malt and was kind of smoky. It was good and I’d normally advise you to be careful ordering this beer because it may sound like you’re asking for a “Black Guy PA” and it’ll get you a bunch of weird looks from other customers…but this is Mesa so you won’t have to worry about running into a black person for miles.

Don’t start with me, Mesa. I’ve spent plenty of time around you. You know I’m right!

The next beer was…sigh…it was called the Zenos Amber. It made me miss my ex-girlfriend, Amber, even though the beer was light-bodied and refreshing while Amber herself was the exact opposite of “light bodied.” In fact, my research into her Facebook page informed me that her stupid current boyfriend Tony had a two-seat Mazda Miata that he had to trade in for a mid-size Corolla because Amber wouldn’t fit in it. Come back, Amber! I’m currently driving a 98 Honda minivan that I occasionally rent out to Mexican drug mules. You’ll totally fit in that! TEXT ME, AMBER, I MISS YOU!!!

Anyway, the next beer was a Belgian Blond Ale called Lolli. A lot of Belgian Ales I’ve had are a little on the heavier side but, like the Zenos Amber and unlike my ex-girlfriend Amber, this beer was light and easy to sip. The citrus shined heavily on the Lolli and it’s definitely worth checking out for fans of lighter, wheat-y beers. But there’s also a Peach Lolli that has a sweeter taste than the regular Lolli without tasting overly fruity. The Peach Lolli is brewed with a bit of the peach skin left in to add a bit of tartness. This was definitely my favorite of BRI’s beers.

The final brew was the 480G IPA. It was a dry-hopped IPA that was smooth with a slightly bitter finish. It wasn’t overwhelmingly hoppy and it was a nice way to finish off my research project.

As I alluded to before I’ve since realized that BRI brews a couple more beers that the ones they were pouring on the day I visited. If you’re in the vicinity of the Mesa Grand Shopping Mall because your girlfriend wants you to take her to a shitty movie you should insist on stopping at The Beer Research Institute first so that you can get hammered enough to pretend to enjoy whatever terrible movie she wants you to watch with her. Just pace yourself though. Don’t get hammered enough that you end up puking in her popcorn bucket that she had to pay for along with the movie tickets because you blew all your money on booze before y’all got in the theater. ‘Cause if you do that she’ll dump your dumbass and end up dating a stupid douche named Tony and she’ll constantly be putting up pictures on her Facebook page of him and his stupid face and moustache and mid-sized Corolla.

Anyway, be sure to visit The Beer Research Institute.