Skip to content
HomeSad Max: The Beer Warrior – Part 2 of 3

Vote The Classy Alcoholic for Best Blog in the Tucson Weekly: https://posting.tucsonweekly.com/tucson/Survey?survey=28178025 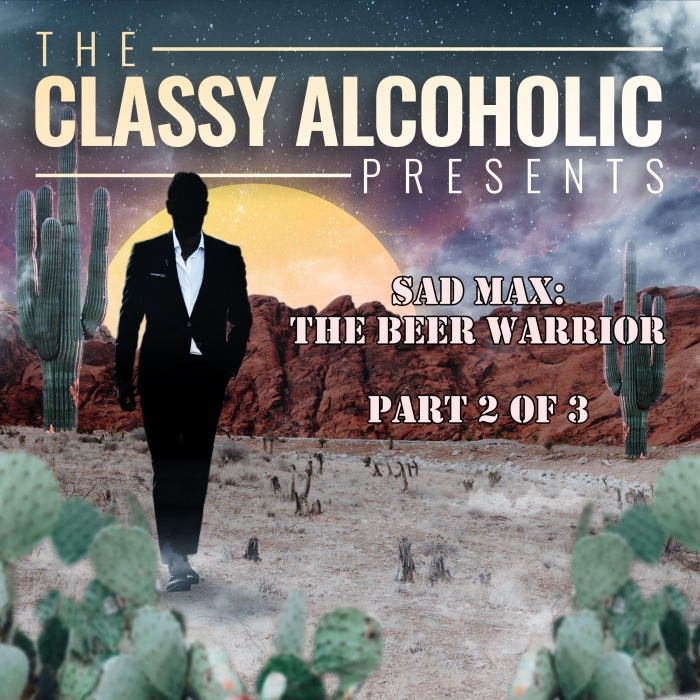 Catch up on Part 1 here.

The Mysterious Stranger made her way through the desert and The Classy Alcoholic followed. She didn’t speak much which made it harder for him to figure out how they knew each other. But it didn’t matter. Everybody dropped a key hint at some point. He once talked to a guy for a whole 20 minutes at a beer fest before realizing it was the dude he escaped a Russian prison with the year before. He would’ve remembered right away but he was shithouse Vodka drunk the whole time they were locked up together.

“We’re close,” The Stranger said, despite the fact that they were in the middle of the desert and there was nothing visible for miles. “Put your hands up and don’t make any sudden moves.”

She whistled loudly enough to make the earth start moving. The sand and rocks slowly stood up around them. The Classy Alcoholic was about to shit himself when he realized he was just looking at four guys in ghillie suits that had been camouflaged as the desert landscape. Four rifles were pointing at his head.

“No disparen, no disparen!” yelled a familiar voice coming out of a cactus. “Holy shit, Classy, I thought you were dead. It’s so good to see you!”

The Classy Alcoholic’s cousin Chico took the top off his cactus camouflage outfit and ordered the other people to lower their weapons.

“I’d hug you but, you know, I’m dressed like a fucking cactus. Oh also there’s that airborne virus that’ll kill you if we get too close. How you been man?  It’s been months. You want some cocaine? I got the real good shit.”

“I didn’t get a chance to thank you for leading me to your cousin, Classy,” The Stranger said.

Shit. He apparently knew this lady well enough to mention his Cousin Chico but he still had no idea when and why he would do that. Did she love cocaine? Maybe she also loved cocaine. Luckily she got down to business before The Classy Alcoholic had to deflect again.

“The Torpedo Boys hit my last safe house in Tucson, Chico. They took the only keg I had left to their base. Classy and I want to take it back.”

“Woah, woah, no, fuck that! I only have four guys right now and The Torpedo Boys have at least fifty in that place. Not only are we outnumbered but I’m not putting my cousin at risk. Sure, most of the family hates him for being an embarrassingly drunken shitshow who ruined our Nana’s funeral by replacing all the holy water in that church with vodka after he escaped from that Russian prison but I’ve actually always kind of somewhat liked the guy. And once The Torpedo Boys find out he’s back, they’re gonna eat him alive.”

“What the hell are you talking about, Chico? How would these people even know me?”

“I’m not the only one who thought you were dead, Classy. Most of Arizona did. But even so your name still means something out here. A lot of people refused to believe you were gone. What’s left of the Arizona booze community still talks about you like you’re the hero they need.”

“But I thought I was doing the right thing by staying indoors throughout the whole pandemic.”

“Maybe you were. I don’t know. But what I do know is that The Torpedo Boys have definitely heard of you. And they would love to take you as a trophy. Their leader is a guy who calls himself Torpedo Tony and he’s a sick fuck. He’ll get his dudes to beat the shit out of you, tie you up, tattoo you to make sure everyone knows you’re their property, and display you on one of their jeeps at the top of a flagpole. And the flagpole is gonna go up your ass.”

“Damn. Of all the ways I thought my life could possibly end, that’s actually kind of in the top twenty.”

“You fucking idiot, you’ll be alive throughout the whole thing! Even with the ass pole!”

“Ugggghhhh. Okay, well, what I’m hearing is that if I walk into that base and grab everyone’s attention they’ll give you a chance to take over their weapon and beer stashes while they’re distracted, right? Pretend it’s just another warehouse full of pallets of cocaine and raid the hell out of it, Chico. I’ve seen you do the impossible to get your hands on some sweet, sweet yayo. I know you can do this.”

Cousin Chico talked to his team of four guys and reached a consensus.

“You’re a fucking maniac, Classy. And I wouldn’t expect anything less. Give us fifteen minutes’ worth of a distraction and we’ll take over that entire place. You can count on it.”

The team made their way toward the Sierra Vista military base. Cousin Chico and his goons hid in the desert again and waited for their cue. The Classy Alcoholic chugged a West Coast IPA can from his bandolier to build up some courage. Three beers left.

He walked right through the blown-up gates of the former entryway shouting as loud as he could.

“TORPEDO TONY! GET THE FUCK OUT HERE. THE CLASSY ALCOHOLIC IS CALLING YOU OUT!”

The army of Torpedo Boys came out of their barracks and watched in awe. They heard tales of this guy for months and months on end. Most of them didn’t believe The Classy Alcoholic even existed and they sure as hell didn’t think they’d ever see him in person. He was like a ghost…a legend around these parts. They started to get the ass flagpoles ready.

Torpedo Tony walked out of the giant warehouse that stored the massive reserves of beer, wine, liquor, handguns, rifles, grenades, flashlights, fleshlights, tuna cans, sex dolls, vape pens, hand sanitizer, butt sanitizer, and ramen noodle packets. He was the only one of the troops who didn’t have any visible deformities. He had the standard number of fingers, hands and heads, it seemed.

“Holy fucking shit, it’s really The Classy Alcoholic! Is it Christmas already? ‘Cause I’m about to hang you up like an ornament for all The Boys to see! Welcome to my home. Can I offer you your last drink?”

“I’m not here for one drink. I’m here for all of them. I’m taking back all the Arizona booze you’ve been hoarding, asshole.”

“You can’t be serious. After all the things I heard about you I guess I should’ve imagined you’d be this stupid. Your time is done, guy. I’m the original Torpedo Boy and I’m the new Classy Alcoholic. I control the booze for the entire state. And I’m twice the man you are. Two times. Like…double.”

“Literally twice the man you are. Twice the man any man is. Like, take any man and I have two times-”

“Dude, are you trying to tell me that you have two dicks?”

“Hell yeah! I got two dicks and it’s dope. You see that guy over there? He has two noses. That other guy over there has two goddamn heads. I’m the one only who came out on top after our evolution. Well…me and this fella Gary.”

A massive, pale, Torpedo Boy with four arms walked out of the warehouse. He was easily an entire foot taller than The Classy Alcoholic.

The mutated Gary let out a series of grunts that roughly translated to, “I’m about to fuck you up real good.”

The Classy Alcoholic wasn’t fast enough to avoid punches from the Gary monstrosity. He lost a lot of agility during the months he spent drinking on the couch. Gary managed to land hits to the head and the ribs at the exact same time, over and over. The Classy Alcoholic ended up on the ground, bleeding from the mouth and nose in no time. This was the longest fifteen minutes of his life. Every last inch of his body hurt but he had one last play. He opened a can of an 11% ABV imperial stout from his bandolier and chugged it as fast as he could. The high alcohol content helped him push through the pain and he managed to get himself up off the floor.

“Is that all you got?” The Classy Alcoholic asked as he got into a fighting stance.