The small town of Camp Verde sits just off of I-17, about an hour-and-a-half north of downtown Phoenix and an hour south of Flagstaff. The last time I was in this area I visited a brewery in the town of Pine. That was the first part of an adventure I called The Rural Brewer Tour, in which I planned to visit microbreweries in parts of the state that felt remote to city slickers like me. It was a rainy night when I drove through Camp Verde. The city looked like a ghost town on a moonless summer night. Raindrops hit my windshield and I could see the thunder roll in my rearview mirror.

Camp Verde is a smaller town than I’m used to with its population of 11,000 people. Verde Brewing Company started in 2013 and now operates out of a historic bar called Boler’s that was built in 1933 back when drinks at the bar probably consisted of only whiskey, opium and racism. Luckily, modern-day Arizona has done away with the opium. 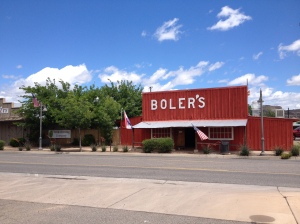 The old Boler’s building looks like the bar sung about in every single country song ever recorded. It reminded me of my ex-girlfriend Gretchen who loved country music and tried to teach me to line dance a few times even though I always ended up trying to do the Electric Slide even though I was really terrible at the Electric Slide. Needless to say she was embarrassed every time we went dancing.

Anyway, I walked into Verde Brewing Company as the sun went down and that lonesome feelin’ followed me through the door while the whole world outside turned blue. There was a small crowd in the place inside and a band was playing country music. I decided to get at a table for two way in the back, sitting alone, when the waitress came by. I asked for a flight of the six beers Verde Brewing Company brews and checked out the food menu.

This place had some great food options such as salads, nachos with home-made chili, beer battered onion rings, chili cheese fries and chicken wings. They also had a few sandwiches, a Sonoran dog and Fish Fridays when you could get either fish and chips or a salmon plate. Their main menu options, though, were gourmet burgers. Verde Brewing Company called themselves a Farm-To-Mug Brewery which meant they used local resources and ingredients in both their food and their beers.

I opted for their fire-roasted green chili burger with local beef, poblano pesto and bacon. I got a salad on the side instead of fries because my fat-ass begged me to ingest some green shit as opposed to my usual intake of fried and greasy food groups. 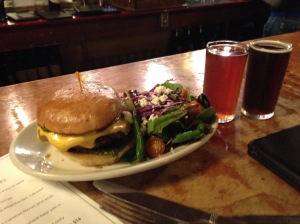 The waitress brought me my beer flight. The first drink was the Gold Buckle Ale. It was a light beer made with local honey and alfalfa. It was slightly lemony and, despite being light, it had a great flavor that was delicious and perfect for turning newbies on to craft beer.

As I drank and savored the Golden Buckle Ale I spotted a beautiful young woman across the bar in jeans, boots and a flannel shirt. She walked over to me and sat at my table.

“I’m The Classy Alcoholic. The second most popular, Arizona-based internet celebrity after Grumpy Cat,” I told her. “I’m on an adventure called The Rural Brewer Tour. I’m visiting all the microbreweries in the Verde Valley and Mogollon Rim areas.”

“How cool! Verde Brewing Company has a beer called ‘Mogollon Rim.’ It’s made with prickly pear harvested from the Rim Country. It’s somewhat tart with a fruity finish and a slightly hoppy undertone. It’s delicious!”

Lorraine was right, this beer was awesome.

“I’ll admit, I’m surprised a little town like this has such a great brewery. I always figured a lot of people in a place like this only drink, like, Coors Light and shit.”

“Well we do get a lot of people like that in here but that’s why there’s Coors Light bottles behind the bar. There’s also some liquor bottles like Jack, Captain Morgan and some tequila. The bartenders here are pretty good at making cocktails.”

I sipped the next beer in the flight while Lorraine was talking. It was called Redneck Rodeo and it was an amber with a strong caramel flavor that finished with hints of plum and raisin. It was delicious just like the rest of the beers at this place.

“So why are you really here?” Lorraine asked. She could clearly see in my face that I was still thinking about Gretchen. She could tell I was remembering us running wild and free while I closed my eyes and sometimes saw Gretchen in the shadows.

“I’m here to try and forget about a girl,” I confessed. “I thought that if I ventured out every night onto some new, neon arms I wouldn’t think about the times Gretchen and I spent tangled up by a fire, casting shadows in my crappy apartment wall, drownin’ in asbestos. Our relationship ended just like a movie scene and I played the part of the drunken lover who stood there and watched her leave. I could’ve chased after her but I was too drunk to drive and I’ve been blacklisted from Uber because I’ve puked in way too many of their backseats. So I just stayed home, depressed, with the curtains drawn to keep the sun out of my face. But every day is a lifetime without her.”

“I get it. I know how girls can be. And you’re in the right place. If you lose your one and only there’s always room here at Verde Brewing Company for the lonely. But you’ll be alright as long as there’s flights of a microbrew.”

Lorraine’s words felt true. I smiled as I took a sip of the next beer in the flight. It was the Off To Jail Pale Ale. This was another beer that was made with local honey and had a slightly hoppy taste to it. The hops weren’t overpowering, which I liked, and it was citrusy at the finish. This was probably one of my favorite pale ales that I’ve had in all of Arizona so far. 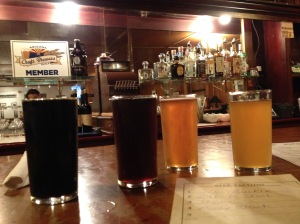 I felt a strong connection with Lorraine and she seemed to really understand what I was going through. I wanted to ask her to dance but I needed another beer to gather up the courage. I drank down the Pecan Dunkelweizen which was made from, of course, locally grown, caramelized pecans. This beer had a strong nutty, malty flavor but also had a slightly wheaty taste to it.

I took Lorraine’s hand and led her to the dance floor while the country band sang their own version of a classic country song:

Ohhh, if you lose your one and only
There’s always room here for the lonely
To watch your broken dreams
Dance in and out of the beams of a microbrew

As Lorraine and I were dancing a large, muscular white guy in a flannel shirt and cowboy hat walked into the bar and saw us dancing together. He was easily six inches taller than I was and towered over me and Lorraine. He looked pissed.

“What are you doing dancing with this loser in a suit?” he said to her, ignoring me.

“Excuse me, sir,” I told him as I stood in front of him, trying to act tough. “I resent you calling me a loser. I’m The Classy Alco-“

The giant cowboy punched me in the chest so hard I flew across a table and knocked a few glasses and chairs onto the floor. My lower back told me not to get back up. And I would’ve listened except I saw him grab Lorraine by the shoulders against her will.

“When are you gonna understand?” he said to her. “You’re my girl, Lorraine!”

“I’ve already told you,” Lorraine shot back, “You’re a dick and I’m not interested in you!”

Lorraine kneed the giant cowboy guy in between his legs and tried to run off but he grabbed her arm before she got too far. He was super pissed at her and looked like he was about to hurt her. I got back up and shoved his shoulder.

I tried to punch him in the stomach but he caught my hand and twisted my arm behind me. My wrist and shoulder were on fire. Lorraine was trying to get the huge cowboy to let me go but he just shoved her onto the ground and laughed. Her eyes caught mine and I knew I had to fight back.

I looked back at my table and saw there was one more beer left in the flight. It was the Honey Pot Stout. It was a dark beer that was also made with local honey. It had a light bourbon flavor with a malty, oaky finish. It wasn’t overly heavy for a stout and it was just as delicious as the other Verde Brewing Company beers. I grabbed the beer with my free hand and drank it down. I felt the strength of the stout running through my hands as I made a fist. I turned and punched the cowboy in the face hard enough to knock him out.

He fell to the ground, unconscious, and Lorraine ran up to hug me. I felt like a hero. Lorraine and I walked outside into the rain. For the first time in weeks I felt like I could forget about Gretchen and start a new life without her. Maybe I could start a life with Lorraine.

“Thank you for taking care of that guy,” Lorraine said to me.

“Don’t mention it. The Classy Alcoholic will always stand up for people in need. So can I take you out on a date sometime soon?”

“Oh. Ohhh…ummm…I’m actually engaged. In fact, my fiancée is right over there.”

I looked over to where Lorraine was pointing and saw a beautiful, redheaded woman, also in a flannel shirt, walking up to us across the parking lot.

“This is my fiancée, Stephanie. She and I farm together. We’re growing a bunch of the ingredients that Verde Brewing Company uses in their beer and food.”

“Oh. Ohhh…ummm…well, nice to meet you, Stephanie,” I said. “I’m glad the Supreme Court allowed y’all to marry each other. I hope you’re very happy together. I’m…gonna head out and finish out the rest of my Rural Brewer Tour.”

I walked away and realized that the romantic connection I felt with Lorraine was clearly one-sided. She only wanted to have friendly conversation with me while I foolishly thought that she could replace Gretchen. But now I realized that I couldn’t get Gretchen out of my head and heart by simply switching her out for someone else. I needed to accept that Gretchen was out of my life…and start anew from there.

I watched the sun hide behind the mountains of the Verde Valley surrounding Verde Brewing Company. This was an awesome brewery and, even though they only had six brews, they had some of the most consistently delicious beers compared to most of the breweries I’ve been to in Arizona. I would definitely return to this place. But for tonight I decided to walk down Camp Verde’s Main Street and watch my broken dreams dance in and out of the beams of a microbrew. 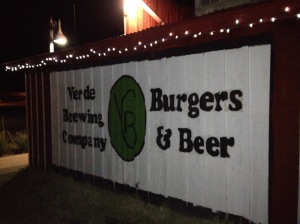