I hate to admit that after nearly a year of writing about Arizona microbreweries and vineyards I hadn’t heard of Superstition Meadery until recently. For those of you who aren’t aware, mead is the world’s oldest fermented alcoholic beverage made from honey. It’s usually described as “honey wine” though in some places in the world there are slight variations on the term and they’re not always considered synonymous. But for our purposes we’ll go ahead and not worry about those distinctions.

I found out about Superstition Meadery when I received a crudely handwritten note in my mailbox that said “COME TO SUPERSTITION IN PRESCOTT” scribbled in honey. Clearly someone knew who I was and wanted me to write about their winery but didn’t have enough spare honey to write out an address on my informal invitation. I licked the honey off of the piece of paper and Googled the location of this joint.

It was brisk and rainy the day I made it in to downtown Prescott. Superstition Meadery is located on Gurley St right across from the Yavapi County Courthouse and just a few doors down from Prescott Brewing Company. But in order to get to the meadery you have to walk into a shop and head downstairs. The place was basically an underground lair, which I appreciated because I hadn’t been in an underground lair since I went through that Supervillain phase in college.

Superstition Meadery had 12 different meads that were all available in a flight for $24. You can purchase 1oz tastes for $2-3 each or a full glass ranging from $7-12 depending on what you want. Be careful, though. The lowest ABV on these options was 8% and the highest was up to 16% so these meads are not to be taken lightly.

There’s also a tapas menu if you’re looking for something to snack on. There were plates with artisan cheeses, assorted olives, a panini melt and smoked salmon bruschetta, among others. Granted, Superstition Meadery can be a bit pricey but I was lucky enough to be visiting the week after I won big money betting on Sonoita Sam at the Arizona Championship Pig Race. Don’t tell anybody, but I heard Sonoita Sam has been using performance enhancing slop. I know it’s cheating but, hey, I gotta make money were I can. Blogging doesn’t pay like it used to. 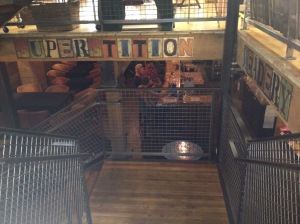 Anyway, I sat at the bar and ordered my flight of 12 meads. I won’t go through every single one during this review but know that he entirety of the flight was excellent. Even if you’ve never tried mead before you’ll be sure to find something you love and will want to take a bottle home.

The first sample was called Lagrimas de Oro and it was a bourbon barrel-aged mead. It definitely had a spicy bourbon kick to it and it was delicious. Bottles of the Lagrimas can be found in all Arizona Whole Foods markets as well as local beer and liquor shops.

I told the bartender that I had received a crude letter in the mail inviting me to come to this place but he didn’t know anything about it. I mean, he definitely knew about my blog when I mentioned it because I’m now the second most popular, Arizona-based, internet celebrity after Grumpy Cat but he didn’t know of anyone who would’ve sent me a personal invitation to come here. Odd. 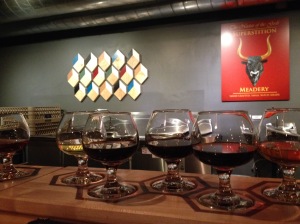 I had a sip of another mead in my flight called Alexander the Grapefruit. As you would expect, it was made with whole grapefruit as well as hops. It was light on the flavor so don’t expect to be overwhelmed with either taste but it was a very crisp and smooth mead.

As I was sipping my drink a bee flew into the Superstition tasting room and sat next to me at the bar.

“Lovely,” he said. “The rain and chilly weather are perfect. Not too cold, not to wet. Just right. What are you drinking now?”

“I’m drinking this thing called Tahitian Honeymoon. It’s made with Tahitian vanilla bean and aged in oak. The vanilla is super strong both on the nose and the taste.”

“Yeah, that’s a good one. My favorite is the Dancing Goat, though. It’s made with coffee and vanilla beans. It’s like a glass of coffee grounds on the nose but smooth on the taste with the vanilla amplifying the entire flavor.”

“Wow, you’re right, bee. That’s excellent. How do you know so much about the meads here?”

“Because I helped make them. And I’m the one who brought you out here.”

“What?!? You’re the guy who left that note in my mailbox? Thanks, it was delicious!”

“Ugh, you actually licked the honey off the piece of paper didn’t you? I guess most people can’t resist. I hope you didn’t think about where that paper had been before it landed in your mailbox. Anyway, I’m glad you’re here. I’m a big fan of your blog and I noticed you had written about a couple other breweries here in Prescott and a bunch of wineries throughout the state. I realized Superstition was absent from your list of reviews.”

I moved on to the darker side of the flight with a taste of a mead called Marion. It was made with marionberry, blueberry and raspberry. The dark fruit flavor was strong and it had a nice dry finish. It was probably my favorite of the flight so far.

“Thank you for reaching out to me, bee,” I told the bee. “I hope you know I didn’t intend to exclude this place from my blog. My goal is to highlight and support local wineries as well as make all my ex-girlfriends super jealous by writing about all the adventures they’re missing out on after they dumped me and started dating the losers they’re all dating now.”

I took a sip of the next mead called Honey Highway. The flavor on the Honey Highway was super strong. It was made with prickly pear and aged in oak. It was probably the most syrupy of the meads on this flight. Bee was looking at me somewhat disappointedly.

“Hey, man,” the bee said, “don’t get too caught up on a woman. Do you have any idea how many of my buddies live only to mate with our queen? Tons of them don’t even have stingers and they die immediately after mating. For my kind, getting dumped means starving to death outside the hive. You’re lucky you get to spend your time going on adventures and discovering cool new places like these.”

“Wow, you’re right, bee. I guess I never stopped to think about how messed up other species’ mating lives were like.”

Superstition Meadery also made a hard cider called Blueberry Spaceship Box. As expected, it was made with blueberry and it was rated the top cider in the world…and for good reason. It was delicious and, despite being very different from beer, Superstition’s meads could be found on the RateBeer website with well-earned high ratings.

“Thanks for inviting me here, bee. I loved this place and I will definitely be back.”

“Thank you for coming and thanks for the great work you do with your blog. Arizona is lucky to have such an insightful and handsome blogger like you.”

“By the way, I never asked you what your name is, bee.”

I could tell that Buzz the Bee wasn’t as amused as I was.

Buzz was pissed. He started charging at me with his stinger held out, aiming for my face. I swatted him away as best as I could but he was determined.

“What the hell, Buzz? I wasn’t making fun of you. Why are you trying to sting me? Don’t you realize you’ll die?”

“That’s how much I hate you! I’ll happily die just to cause you some significant discomfort and swelling for the rest of the day!!!”

Buzz managed to jam himself into my forearm before I smacked him off me. I could see a small bump growing out of my skin and I felt the burn from his sting. I saw Buzz on the ground, wiggling and buzzing (heh) around the floor. I leaned down toward him.

Buzz stopped flailing. It was just a simple misunderstanding…but it somehow ended up with me losing my new friend. I left Superstition Meadery and walked out into the rainy Prescott day.

I thought about what Buzz said…how I was lucky to be alive despite being dumped by many an ex-girlfriend. I decided to enjoy the rest of my day here in Prescott and not worry about any ex-girlfriends and trying to make them jealous with my adventures. It was the least I could do to honor the memory of my friend…heh…my friend Buzz.

Superstition Meadery was a perfect start to my next adventure. It had delicious honey wines and you should make an effort to track down their bottles in your local liquor store. And be sure to visit their tasting room in Prescott. 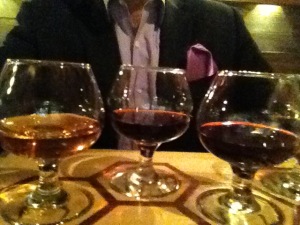